Harry Bates and John McCarthy are in with a chance to take out the Australian Rally Championship title following the pair's victory in the Adelaide Hills Rally over the weekend. 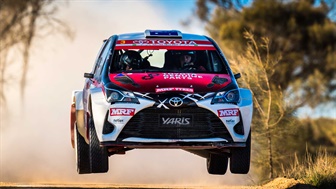 Harry Bates racing to victory in the Adelaide Hills Rally.

Harry Bates and John McCarthy are in with a chance to take out the Australian Rally Championship title following the pair's victory in the Adelaide Hills Rally over the weekend.

After winning both of Friday night's super special stages at The Bend Motorsport Park, Bates' Toyota Genuine Parts Yaris AP4 proved faultless on Saturday, winning all bar one stage to take out Heat 1.

Going into Sunday's Heat 2, Bates had to battle hard to consolidate his win with intense competition throughout the day from second-placed Steve Glenney and co-driver Andy Serandis while the combination of Eli Evans and co-driver Ben Searcy also applied plenty of pressure.

Evans was series leader going into the Adelaide rally and drove furiously to maintain his championship position but Bates was always there, winning a further four stages with an incredible dead heat with Evans on the 14.38km stage 13.

Bates finished Heat 2 in second place, just 18.6 seconds behind Evans after 115km of special stages, but his dominance of Heat 1 gave him a total of 75 points and the overall win for the round.

Harry Bates said he was really pleased to have a second win under his belt as the team now prepares for the final outing for the year at Rally Australia.

"We started the season well with a round win at Ballarat but have not been able to repeat that until now," Bates said.

"The car really performed faultlessly over the weekend and we had good pace, so it was great to finish with a win and some solid championship points.

"It's now all going to come down to the wire to see who takes out the season title after Rally Australia, so we are really looking forward to it and there should be some great racing."

The Neal Bates Motorsport team's second car, driven by Lewis Bates and co-driver Dale Moscatt, was also looking at a top five finish after ending Heat 1 in fourth spot but engine issues with the Corolla S2000 on Sunday saw the team finish the round in seventh place.

Going into the Adelaide rally, Evans led the driver's championship on 290 points ahead of Glenny on 239 with Bates in third on 206 but a post-Adelaide rally penalty on Evans saw his Heat 1 result excluded with a further 20 championship point penalty.

Glenney finished in eighth place in the Adelaide rally after rolling his car on the Sunday ensuring Bates' points for the weekend lifted him into second place overall and just 29 points behind Evans (pending appeal) going into the final round.

Bates and McCarthy are now looking forward to Rally Australia with all the ARC and WRC action hitting Coffs Harbour from November 15 to 18.

Toyota has a proud international motorsport history spanning more than 60 years. It became the first Japanese car manufacturer to enter international motorsport when it contested the 1957 Round Australia Trial. This is why many people consider Australia to be the birthplace of Toyota motorsport. Today, Toyota contests the FIA-sanctioned World Rally Championship, World Endurance Championship which features the famed 24 Hours of Le Mans, and the gruelling Dakar Rally. Closer to home, the Toyota 86 Racing Series seeks to develop the talent of tomorrow as Australia's premier grassroots circuit-racing category. Toyota also supports the Neal Bates Motorsport team in the Australian Rally Championship.

Find Out More At Northpoint Toyota
Back to News