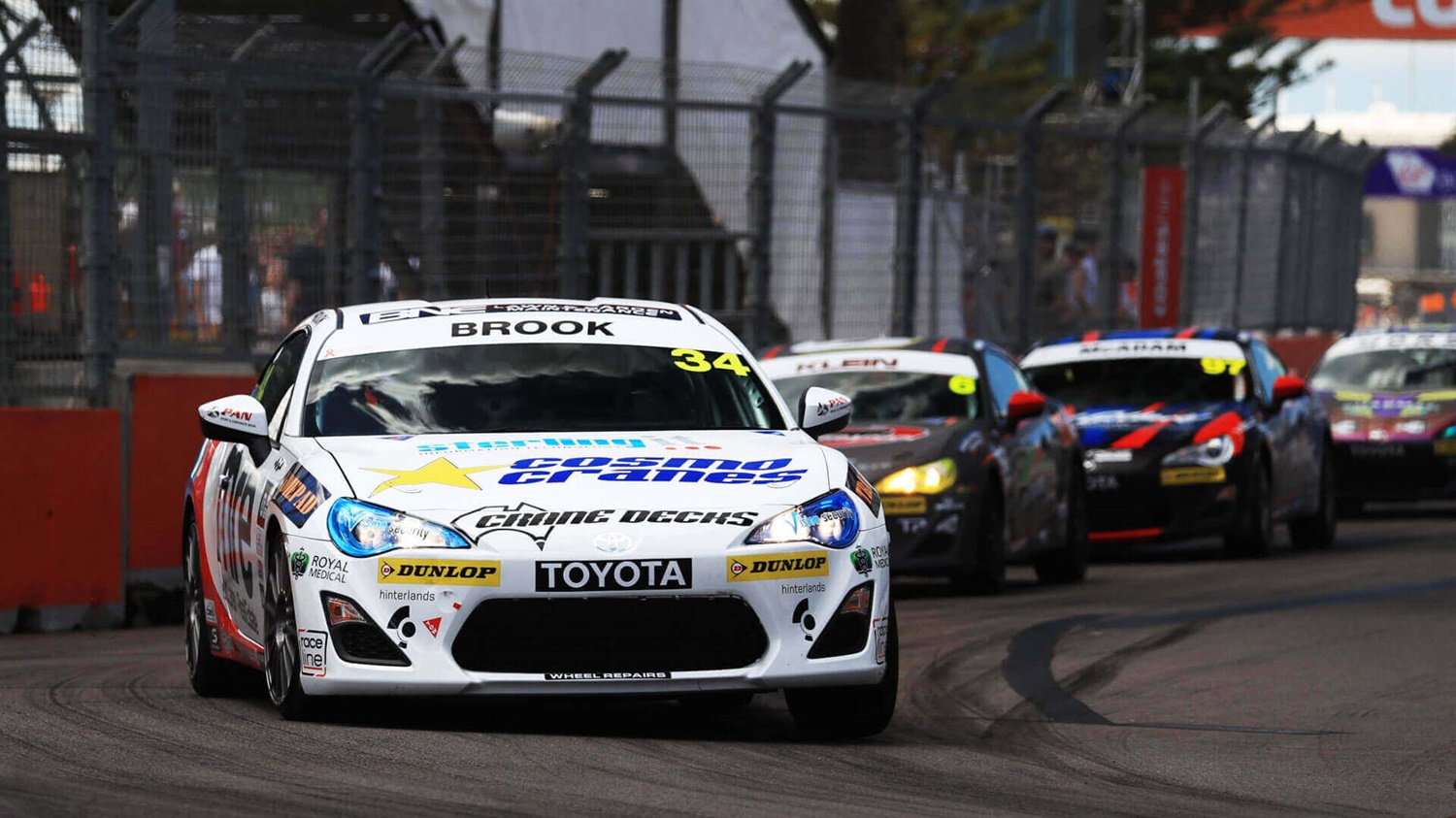 Tim Brook has won the 2018 Toyota 86 Racing Series championship title* and a prize purse of $50,000 after scoring two podium finishes in the weekend's action-packed season closer at the Newcastle 500.

After qualifying in 8th place for the first race of the weekend on the Newcastle street circuit, Brook displayed the same calm, determined driving that saw him finish the season with 11 podium finishes including five wins, and finish Saturday's Race 16 in fourth place.

With a pair of second place podiums for the final two races of the season on Sunday, the 32-year-old Brook finished the year with a total of 1402 points, ahead of Luke King in second place on 1290 points with Cameron Crick completing the season podium with 1184 points.

Speaking after the final race, Tim Brook said he couldn't be happier with the result.

"I think I yelled pretty loud as I crossed the line so I'm super stoked, so happy," he said.

"It feels pretty good, there are no words to be honest, just a massive thank you to everyone here that has made it possible.

"You are only as good as your tools and I couldn't do it without them.

"To think this was my daily drive 12 months ago and to turn it into what we have done, it's an awesome achievement for everyone involved.

"You work so hard and sometimes you don't know if you are going to get the job done but to have the year that we have had, it is just phenomenal. I just couldn't be happier," he said.

In a season that saw eight different winners from 18 races, there was plenty of intense action in the final round at Newcastle with four drivers - Brook, King, Crick and Jake Klein - all in contention for the season title.

After setting a blistering pace in practice however, it was young 18-year-old Declan Fraser that claimed pole for Saturday's race. He led from start to finish taking the chequered flag with a massive 4.496 second margin ahead of invited Supercars driver Luke Youlden with King taking third place.

Liam McAdam, who dominated the season opener at Phillip Island with three race wins, was finally back in form rounding out the top five in the first 86 series race of the weekend.

On Sunday morning Race 17 got off to a fine start with Youlden beating Fraser off the line to take the lead through turn 1 and through the first five laps, the pair battled hard to keep their positions ahead of King, Brook and McAdam.

Contact between King and Fraser on lap 7 saw the former pushed into the wall with King dropping to seventh and Fraser spinning and losing 10 places in the process.

For the final race of the season, King was still theoretically in contention for the title but starting from 19th on the grid with a severely battered car, it was a very long shot and as Brook took the lead from the front row ahead of Youlden and McAdam, his title looked even more assured.

McAdam took the lead on lap 5 with Brook and Youlden close behind while King had climbed 10 spots to be in ninth place at lap 9.

But it was not enough with the three leaders maintaining their pace with McAdam finishing the season the way he started at the top of the podium, Brook in second, and Youlden in third.

Despite the troubles King, Crick and Klein suffered at Newcastle, each had enough season points to maintain their standings on the championship table with 16-year-old Jaylyn Robotham rounding out the top five for the season.

The Toyota 86 Racing Series returns in 2019 as part of the Supercars support program.

* All results are provisional

The Toyota 86 Racing Series is designed to provide an entry point and training ground for up-and-coming drivers, offering a prize pool of $150,000.

Open to variants of Toyota's cult-classic sports car, the series is part of the support program at selected rounds of the Virgin Australia Supercars Championship.

For regular updates and more information go to the Toyota 86 Racing Series website.

Toyota 86 Racing Series
Back to News